The following should be taken into account when choosing the parsing mode:

- A module can be configured to run in one parsing mode.

- Modules that were created in a version of IID prior to version 7 will run in the eager parsing mode without any changes required.

- By default, modules and libraries that are created in IID version 7 and later versions will be given the most suitable parsing mode depending on the parsing mode of

- For better performance, avoid using mixed mode (eager, lazy) for application modules that frequently interact with each other.

- The interaction between modules with diff erent parsing modes takes place through serialization and deserialization, which can negatively affect performance.

- If using a mixed mode is unavoidable, starting an application from an eager parsing module to a lazy parsing module is more efficient than the other way around.

The WebSphere runtime uses the RMI/IIOP for the synchronous  invocations.

Assuming we have the following scenario:

In this case there is a slowdown in speed due to the serialization and deserialization of the data between the two servers. A slowdown is introduced also if the parsing modes of the two modules are different, as show below:

An attractive alternative solution for these kind of invocations (intermodule between two different clusters) could be the following:

where the SCA cross JVM invocation has been replaced by a Web Service binding invocation.

(Note that the module M1A acts as a static single access point for multiple consumers that want access to the services provided by the Cluster B modules.) 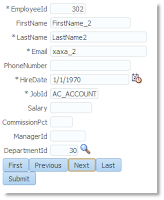 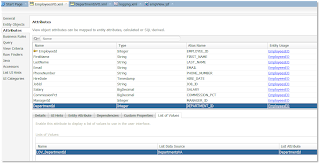 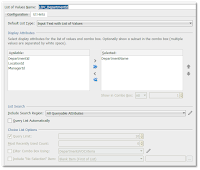 Create the AdminClient class&nbsp;in order to provide the client side APIs for the remote AdminService.

For each TransactionService MBean print its active transactions:

Within a one phase commit a transaction manager (responsible for managing the transactional operations of transactional components) sends out the commit message after a unit of work is executed.

Using more than one 1PC resources in the same transaction

Both figures above illustrate the following:


The result of the above configuration is the following exception:

These errors occur because there are more than one one-phase capable (1PC) resources within a global transaction.

Two alternative configurations are illustrated below in order to resolve the above problem. 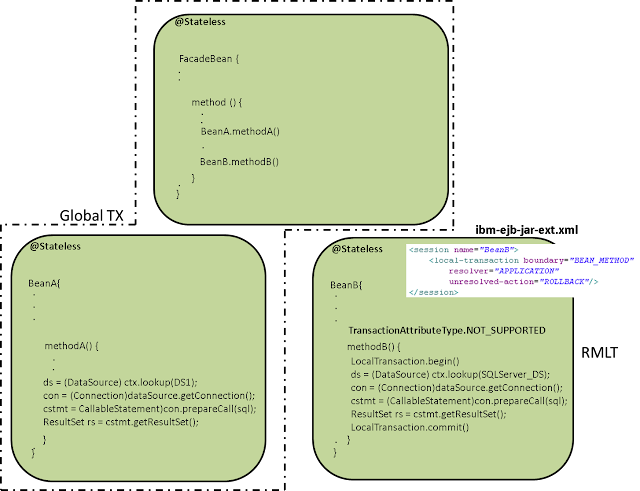 In case there is a need to search or compare database contents (without knowing at the beginning in which table to search for - such that to use sql statement(s)) then you could export database tables data in delimiter file format as well as export  all LOB and XML data. The script below illustrates this scenario.

Email ThisBlogThis!Share to TwitterShare to FacebookShare to Pinterest
Labels: DB2

The result of the above configuration is the following exception:


Two alternative configurations are illustrated below in order to resolve the above problem.

The following configuration should be used if a Java SCA component invokes the SQL Server Linked Server (instead of the Session Bean described in the above examples).

[3] IBM Support Portal - “Changing the default isolation level for non-CMP applications and describing how to do so using a new custom property webSphereDefaultIsolationLevel"  Date of access: June 2013. http://www-304.ibm.com/support/docview.wss?uid=swg21224492

A service integration bus provides location transparent messaging, meaning that an application can connect to any bus member and send to (or receive from) a destination deployed to any bus member. The destination does not need to be deployed to the same bus member that the application connected to,
the bus routes the message to (or from) the destination. This section will describe how to use the Java application programming interfaces (APIs) in order to create a tool to navigate through the messaging components of a SIBus.

For a standalone application the first step is to create the AdminClient class in order to provide the client side APIs for the remote AdminService.  This is shown below:

If the code will run inside a WebSphere JVM (i.e. as an MBean) then the following code should be used:

It should be noted in this regard that the above code should be run inside the Messaging infrastructure JVM if a deployment environment is used (not a single server in a single cell).

The next step is to find all SIBMessagingEngines:

Then for each SIBMessagingEngine we are looking for all attached SIBQueuePoints:

For each SIBQueuePoint we are quering for the following attributes:


If the current depth of this SIBQueuePoint is greater than zero (could be greater than a specific threshold if you need to implement a simple monitor solution) then we get the queue messages:

For each message within a queue we print message attributes:

Then we print the queue message details:

Finally we print the message contents: